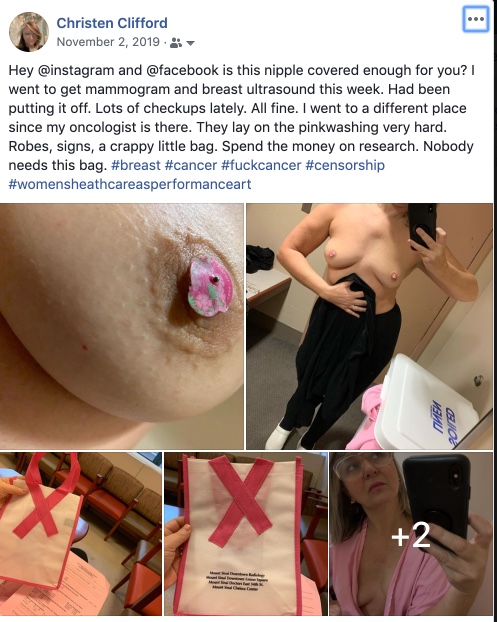 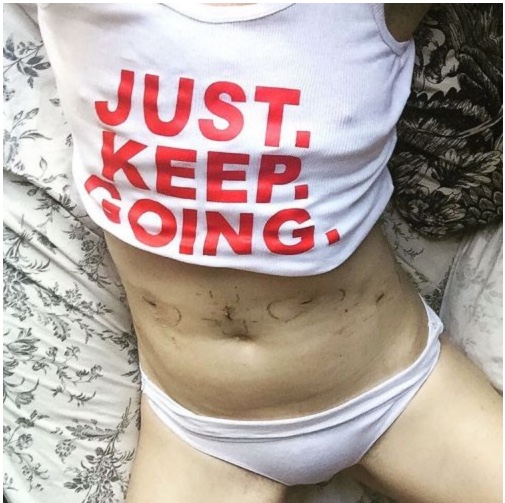 One reason was ‘nudity’ but there was no nudity in any of the photos shown to me as the reason! Another time I was banned for posting the work of Laura Aguilar.

My artwork is about body politics and ending shame, I explore the post-maternal body and sexuality, including images of menstrual blood and post-surgery scars. I also used hashtags #vulva #vagina #recotocele #maternalsexuality #clitoris #uterus.

When I had uterine and ovarian cancers I was also using those hashtags, along with #uterinecancer #ovariancancer #fuckcancer.

Yes, sometimes they were reinstated, sometimes not, non-binary and trans bodies are routinely excluded.

It was really difficult emotionally to be banned from IG and FB for two weeks while I was in chemotherapy, and had little to no contact with the outside world. Social media was my only real contact with my friends, I had very little energy and couldn’t be writing/saying the same things to multiple people over and over and Social media was my lifeline, and I was cut off.

I felt angry, sad, and hopeless without the friendship that these sites purport to create, not destroy.

In regards to my own body, censorship of my experience makes me feel like I don’t matter, that my body and its functions and experiences are to be shamed. That bodies with cancer, bodies with a vulva and clitoris are less than. That queer bodies, trans bodies, femme bodies, non binary bodies, black bodies, fat bodies  and the bodies of the global majority don’t matter. Censorship is based on algorithms created by mostly cishet young white men that favour cishet young white men.

With regards to my artwork, it doesn’t get the same exposure, especially when shadowbanned for language. That results in loss of the currency of attention, which leads to loss of shows, income, etc.

Online censorship impinges on artistic freedom, removes bodily autonomy, and has real world emotional consequences when individuals are cut off from their communities.